Type foundry Typotheque has created a series of new typefaces and proposed changes to the way digital characters are encoded to make it easier for Canadian Indigenous communities to write digitally in their own language.

The North American Syllabics project has seen the Dutch studio work closely with groups who use Native Canadian Syllabics – a family of writing systems, also known simply as Syllabics, which was developed in the 1800s to indigenous groups in the region.

This resulted in three new syllabic typefaces, as well as crucial interventions in how the Unicode Consortium encodes languages ​​for digital use through the standard Unicode character encoding system.

“When it does not contain characters in the spelling of a given language, it is not possible for this community to accurately use their language on digital text platforms and exchange emails, SMS or digital texts in general with other users.”

Commonly, syllabic users encounter errors such as “undefined” boxes appearing in place of missing characters, or poorly readable fonts due to inaccurate character heights or shapes.

According to King, such errors prevent speakers of these languages ​​from easily participating in email sharing and using social media platforms like Twitter or Instagram in their preferred writing system.

“In many cases, users will switch to a majority language such as English, putting that minority language at risk of digital extinction,” he added. 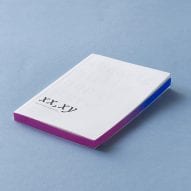 Together with Indigenous leaders in Canada, Typoteque filed two requests with the Unicode Consortium to correct these errors, one concerning the Nattilik and the other the Carrier-speaking communities.

Both succeeded and will mean that all future syllabic typefaces should be more readable, King explained.

Typotheque has also created three new syllabic fonts: Lava, November and October. All three were designed by King and are versions of typefaces originally created for the Latin alphabet by Typotheque founder Peter Bil’ak.

Lava was originally created with magazine printing in mind. But Typoteque describes it as a good all-purpose font that offers extreme readability even at small sizes.

The typeface includes a secondary cursive style to allow for emphasis and other forms of expression. This was a particular challenge for King given that cursive styles are often derived from historical manuscripts, which do not exist for syllabic writing, as Indigenous groups in Canada have an oral tradition.

The November font is designed primarily for wayfinding and information systems, though Typotheque claims it works well for long text as well. October is a rounded style described as having a “friendly character” and working well for signage, information display, packaging and branding projects.

The typefaces all include a number of stylistic sets designed to cater to different communities, as some use more square syllabic shapes and others rounder.

Typotheque worked closely with indigenous communities throughout the process, first to discuss and understand the issues they were having with digital communication, then to build the Unicode proposals together, and finally to test the fonts as they were development.

“They were always influential in the resulting typefaces, ensuring that the resulting tools would overcome the obstacles their community faced and meet their expectations of how their syllabics should work and look like,” said King, who is himself based in Toronto, Canada. .

Typotheque was founded in 1999 by Peter Bil’ak and aims to make its typefaces support as many of the world’s writing systems as possible.

One of the studio’s other typefaces is Oli Grotesk, which Indian graphic designer Shiva Nallaperumal has adapted to traditional Indian scripts.